Adapted from the Catholic Herald.

There's a touching scene in Tony Blair's newly published memoir An English Spring. It is May 1994, and Labour leader John Smith lies dying. The then Shadow Home Secretary, Anthony Blair, is ushered in to say a final goodbye. "John Prescott will have to take over this job," says the dying Smith, whose mind is already wandering. However, the message is relayed back as "It's all yours, Tony," and the rest is history. 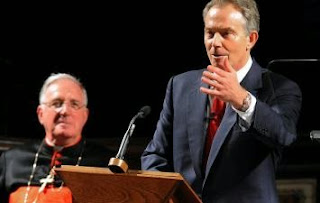 Cormac Murphy-O'Connor is admitted into the Labour Party.

Tony Blair faced several challenges during his time in power, not least Cardinal Murphy-O'Connor telling him he wanted to join the Labour Party. The news came as no great surprise, he says. "He'd been a bit of a leftie for twenty-five years, and his conversion had been expected for a long time. Cormac's getting a bit of a bad time now, without even the usual twenty million pounds and a string of luxury mansions to console him in his old age, and I feel sorry for him. He made many mistakes during his time at Arundel and Brighton - oh, and at Westminster too - and ever since then, come to think of it - but he doesn't deserve the kind of treatment he is getting. Well, actually he does, really."

Adapted from the Spectator.

The Heckler: why does Damian Thompson have to be so rude?

Damian Thompson is talented almost beyond measure. He is the leading Bach expert of his age, or indeed any age, but is also equally at home with Gladys Mills. His stupidly-named Orchestre Petit Gâteaux et Crème Anglaise has notched up one triumph after another over the decades. At 53, Damian is at his artistic peak, the author of numerous books and articles, and you have to wonder: is there anything this man can’t do?

The answer is yes. One art eludes him: good manners. He's perhaps the only Telegraph blogger to have had his own comment on his own blog deleted by his own moderators, when he described a sensitive female commentator as "You spiteful cow!" He told another "I will not be lectured to by you, Mrs Farrow." Then again he had a blazing row with the normally-timid Peter Hitchens, storming out and knocking over a blind little old lady in the corridor. 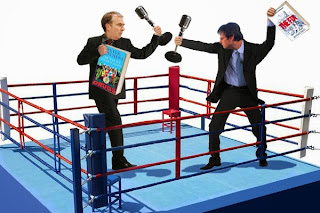 Clash of the Titans!

Many geniuses have been bad-tempered - think of Beethoven, Evelyn Waugh, even Pope Francis - and Damian’s friends think all this is unfair. Although he is generously endowed with self-esteem, he is not a monster like George Galloway. He inspires deep affection in some colleagues. Belatedly anxious about his image problem, he now says he has "mellowed". That may be true, but there is plenty of mellowing still to do. "I said 'hello' to Damian on Twitter not that long ago," says one award-winning saved blogger, "and he stared through me as if I was a parlourmaid."