As reported by the Anglican writers Cranmer and Ruth Gledhill, Westminster Abbey has been moving steadily Mecca-wards, with prayers describing Mohammed as a "prophet" - without the usual adjective "false" - and "the chosen one" - about which Christ might have had something to say. However, all is now explained with the news that Westminster Abbey is to be converted into a mosque. From now on the Dean should be referred to as Imam John Halal, er, Hall, although he will now have the option of choosing a more Islamic name, such as Abu Hamza, George Galloway, or simply Jihad John II. 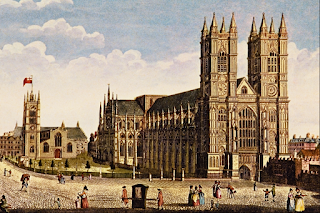 Westminster Mosque, before some necessary alterations.

It is expected that Imam John will call the faithful to prayer every morning by shouting some suitable message from one of the towers of the mosque. Suggestions here include yelling the great religious hymn "If I were a fuzzy wuzzy bear, I'd thank you Lord for my fuzzy wuzzy hair" at bemused passers-by, or possibly a simple message of invitation such as "There are tea and halal biscuits being served in the Giles Fraser Chapel." Since Westminster Abbey will be a "Liberal Muslim" mosque, we do not expect to see any signs of radical Islam, although the Teenagers' Radicalization Group will continue to meet on Wednesday evenings. Indeed, Canon Jane Sinclair will continue as a "Lady Imam", although naturally she will need to wear a burkha. 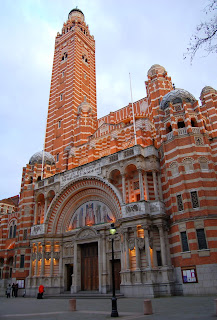 Will Vincent Nichols follow suit at Westminster Cathedral, which already resembles a mosque?

It is thought that the explanation for the change from Anglican (well, originally Catholic) Abbey to Islamic mosque may be linked to the promise from Labour leader Ed Miliband that "Islamophobia" will be made a crime if he wins the forthcoming general election. Christians, of course, enjoy no such protection. 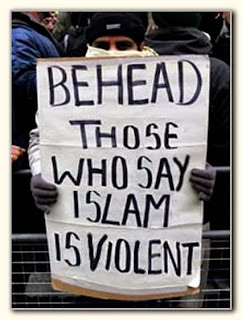 This week's brain-teaser: a homosexual couple goes to a Muslim baker's demanding a "same-sex wedding" cake. When the Muslim proprietor refuses, they sue him. Is he guilty of homophobia, or are they guilty of Islamophobia?