After apologising to the Protestant churches for the persecution they suffered during the Reformation - and most of us didn't even know that he was personally responsible, so it's very good of him to take the blame after all these years - Pope Francis has now made the grand apology that we've all been waiting for. 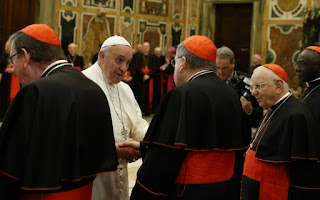 "It's time for me to apologise for the persecution for which I myself am responsible, rather than some long-dead people that I never even knew," he said. "Therefore I wish to apologise to traditional Catholics for all the persecution they have suffered in the last three years."

The Pope went on to apologise for the treatment of the Franciscan Friars of the Immaculate, for the bullying of Cardinal Burke, and for frightening people with threats to change Catholic teaching on marriage and the family. 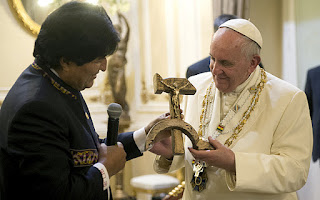 "I apologise for not clubbing President Morales over the head with this abominable object."

The Holy Father went on to apologise for all the insults he had come out with on a daily basis, including the notorious "self-absorbed Promethean neo-Pelagian" epithet. He was also very sorry for his ferocious outburst against the Curia in Rome, when he accused them of suffering from "spiritual Alzheimer's".

"Such rudeness is inexcusable," he admitted. "As Pope I am supposed to preach love and mercy, but sometimes I simply can't manage it. But you know how irritating Catholics can be - just because Jesus taught something, and it's been agreed by the Church for two thousand years, they tell me it has some sort of official validity, and so I can't change it. You wouldn't find the Protestants making that sort of mistake!" 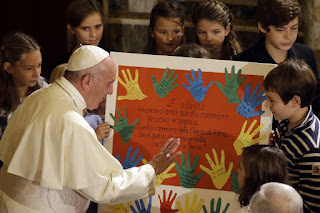 "And I'm sorry I left handprints all over your painting."