Over now to the Anglican Communion, where the news is that Canterbury will be hosting the long-awaited gathering of primates. Justin Welby, the Archbishop of Canterbury, is representing the humans, but - the Anglicans being a very broad church - we shall also see baboons, gorillas, chimpanzees, etc. taking part. There will also be a guest keynote speech from King Küng the dissident Catholic.

Veneration of relics, from the last gathering in 2001

The meeting is expected to be very controversial, with disagreement on a variety of topics. For example, vestments: only the human clergy tend to wear clothes in church, but that is because (with the exception of Rowan Williams) they are not entirely covered in fur. Also, consider the case of Katharine Jefferts Schori. She wears the worst vestments you've ever seen outside a clown act in the circus, but the prospect of her stripping off is even more terrifying. 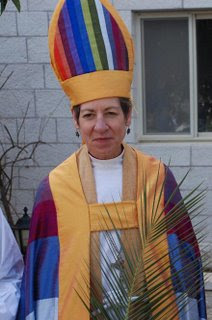 Keep them on, Kathy!

Another issue is bananas. No, nothing to do with the views of Giles Fraser (who accidentally wrote something sensible recently), but the fruit. Many primates find it hard to obtain bread and wine, and would prefer bananas as an alternative for Communion.

Then there's swinging from the beams, while scratching oneself under the arms. For many primates this is an acceptable form of worship, but for conservative Anglicans it may be a liturgical dance too far. 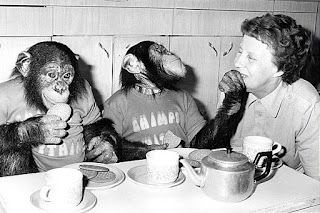 Then there is the liturgy. Could it not be reduced to a simple "Oook!"? The Catholic Paul Inwood has offered to produce a chant "Alleluia, oook, oook!" in the interests of ecumenical understanding.

Indeed, the Vatican itself has been very much involved in Primates 2016, lending St Gregory's crozier to the Church of England for the occasion (also, as it happens, Canterbury Cathedral, which has been on loan on and off since 1536). 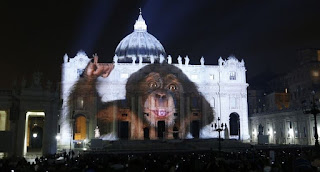 The Vatican marks the primate gathering