We have been sent a school report for a boy called Jorge Bergoglio who attended St Evita's Academy, Buenos Aires, in around 1947. We don't know what happened to Jorge (at that time he said he wanted to become a butcher), but the report may still be of interest to some readers. 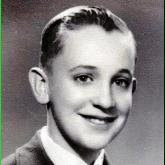 Science. This seems to be Jorge's strongest subject. He is very fond of letting off explosions and startling his friends - so much so, that he is thinking of studying chemistry when he grows up. He is definitely one for experimenting, and it is hard to make him obey instructions. Indeed, I put him in detention after he accused me of "divination" and "idolatory" for insisting that he make gunpowder according to the book.
Che Guevara, Science Teacher.

Religion. Jorge is a studious boy, who has read the whole Bible, although he sometimes gets confused between Christian teaching and the works of Karl Marx. He tells me that he is inspired with the Spirit of Vatican I, and so everything needs changing - it doesn't matter how, just so long as it changes. Jorge's friends do get rather annoyed when he accuses them of being creed-reciting, parrot Christians. As a joke I suggested that he should become a priest. How we laughed! In fact, he's more likely to end up as a Lutheran pastor.
Fr Ray Bentos, Religious Studies teacher.

"God bless Mummy, and keep her from neo-Pelagianism."

Latin. Very weak. He seems to think that it is the same as Italian. Must try harder.
Jorge Luis Borges, Latin teacher.

Sport. Jorge is a very strong boy, and when he grows up he could easily make his living as a bouncer at a club. He must learn to curb his natural aggression - for example he punched another boy on the nose for insulting his mother.
Mara Dona, Sports teacher. 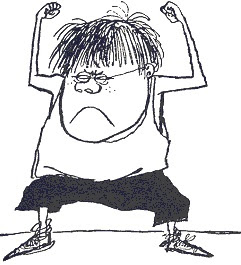 Jorge in the gym.

Headmaster's assessment. Jorge is an interesting child. He has some good friends (he was very kind to our exchange student Walter Kasper, and it was certainly not his fault that Walter burnt down the school library). Still, at the same time, Jorge does tend to irritate people by perpetually criticising and insulting them. He seems to think he is infallible, but he needs to realise that this has its limitations. His teachers agree that Jorge always has a lot to say, although he must learn to write comprehensibly. Asking old Scalfari the odd-job man to type out his essay for him was a blunder that had the whole school laughing!
Leopoldo Galtieri, Headmaster.