Today we are pleased to be able to print an abridged version of the Telegraph blog by Snowball the pig, winner of the prestigious Orwell prize for his role in Animal Farm and his pioneering slogan about marriage: One man bad, two men better!

What cheek! Vincent Nichols invoked the spectre of an Orwellian, totalitarian state in his Christmas Day sermon, when he referred to the Government's attempts to bring in same-sex marriage. Christmas is a time for preaching a message of love and sex, for getting drunk and watching The Wizard of Oz on the television, and for wearing red hats with white trimmings. It is NOT a time for talking about morals, for trying to explain good and evil, or for mentioning controversial figures like Christ.

If Vincent Nichols had merely done what most priests do on Christmas Day: talked in vague terms about Father Christmas, and elves, and perhaps told us what Christmas presents he'd received, then nobody would have taken any notice. But he deliberately outraged non-Christians by taking a moral stand. 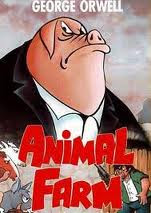 My partner, Napoleon, agrees with me.

What makes it more outrageous is that the Pope is an ex-Nazi - yes, he is, he is, he was a personal friend of Hitler, I tell you. That alone should stop him from condemning totalitarianism, fascism, dictators, or anything else. Bog off back to your bunker, Ratzinger, what makes you think you have any authority? Did you get an Orwell prize like me, or Polly Toynbee, or even Johann Hari? 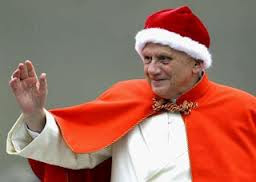 The Pope, in the uniform of the Hitler youth, does a Nazi salute.

Well, that's put the Catholic church in its place - as the paramilitary wing of the National Socialists - so let me drone on a bit about Clause 28, that infamous piece of legislation which said that every day schools had to conduct a compulsory Two Minutes Hate for homosexuals. My own school didn't do this - in fact, they didn't mention homosexuality at all, except in geometry lessons, where some of the diagrams taught me how to find a loving life with another man. 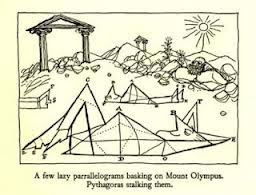 Clause 28 banned diagrams like this, which taught me about sex.

Gosh, we had enough trouble reducing the age of consent to 16. You may say that boys of 16 aren't ready for sex, but of course the person they have sex with is often a fat man 20 years older, and he's not only ready, he's dying for it! Anyway, we won that battle, and now we're ready for the final battle - the complete take-over of marriage.

The Archbishop's relentless campaign - which lasted all of ten minutes - makes me more determined that the change must come. As I'm typing this I can hear the howling winds, still, loudly outside my window; the waves crash onto the shore, and the rocks on the beach are slowly worn down. Which is very odd, as I'm in a padded cell in London. I think I need more medication. Nurse! 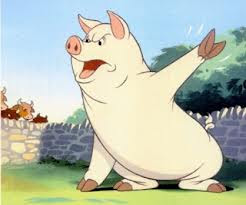 Beasts of England, Beasts of Ireland...