This may shock some readers, but the man revered by millions of Catholics as their leader - the person who tells them what to think - is now expected to move on to another job before long.

Things began to unravel for him a month or two ago, when it was clear that he refused to regard the communist tyrant Fidel Castro as simply a brutal dictator, and went from bad to worse when he became involved in the storm over Amoris Laetitia. 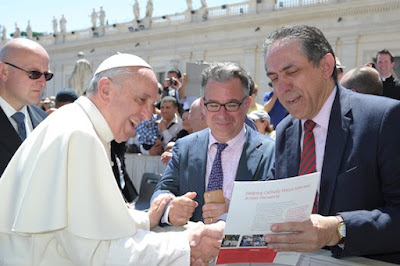 SInging "The Holy and the Ivereigh" together.

Yes, Austen Hercules Ivereigh, the Holy Father of Catholic Voices (expected to merge soon with its rivals Anglican Waffles, Muslim Screamings and Secular Spleens), is getting further and further out on a limb, and will surely drop off soon to take a cushy job as Pope Francis's confidant, odd-job man and assistant wielder of the Spadarine sockpuppets.

Some say he jumped the shark when he referred to critics of Amoris Laetitia as dissenters, urging Pope Francis to break with Catholic tradition and ignore the four cardinals' dubia. Others say that this was a mere training leap - over a mackerel, say - and that he was really saving his athletic exploits for an attack on the Polish Church: their fault, roughly speaking, is that they are unhappy at the way Pope Francis contradicts the teachings of their own Pope St John-Paul, not to mention the 260-odd previous popes, the apostles, and a certain Jesus Christ of whom some theologically-expert readers may have heard. 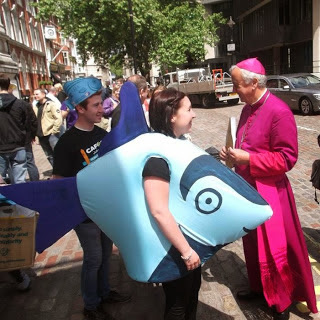 VIncent Nichols learns about the liberal sport of shark-jumping.

Well, we shall miss Uncle Austen if he retires to Rome in order to give the pope a helping hand, but from here he doesn't have many options. Either he has to come out with more and more ludicrous statements ("Why Fidel should be canonized," "Bring back torture for Cardinal Burke," or "52% of Catholics are literally Satan"?) or (unlikely) tell us the answers to the dubia so that we can all get back to being holy people again, or shut up for a few months and write "Pope Francis Volume 2 - the Vatican Strikes Back", or... well do something else.

Meanwhile, Austen has not yet answered our 5 yes/no dubia: Are you off your head? Do you need a lie down? Are you serious? Did you really say THAT? and Have you been hacked?