A new series of the television series I'm a heretic, get me out of here! is just starting. It will be hosted as usual by those lovable churchmen Cantoris and Decani (Cant and Dec), and the line-up this year includes the great Hans Küng and Professor Tina Beattie. 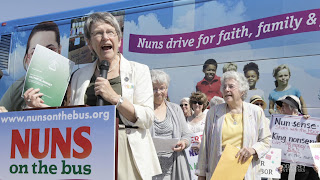 Sister Nadine of the Nuns of St Omnibus.

Cant and Dec explained to us that the contestants would undertake various challenging tasks, which would include swallowing disgusting things - such as Tina Beattie's religious writings - and carving a termite mound into the likeness of a famous theologian. A termite mound carved into a statue of Hans Küng.

We asked whether the contestants would get Sundays off in order to attend Mass, and Cant and Dec merely responded with hysterical laughter. Now why should that be?

The death is announced of Father "Grandad" Dunn, at the age of 92. Fr Dunn was a member of the religious organization Exercitus Patri, which flourished in the 1970s. He is fondly remember for his sermons on the subjects, Panic ye not, panic ye not, my people, O Lord, grant me permission to speak, and The ungodly one liketh not a smiting from below. RIP.

Meanwhile, speculation is mounting that the Bishop of Durham, Justin Welby, a former oil tycoon, will be appointed as the next Archbishop of Canterbury. 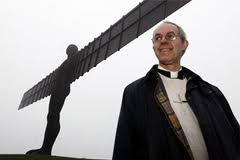 Justin Welby - on the side of the angels.

Welby is the author of many well-regarded theological books, such as Holy Unction - why don't we use more oil? and Natural gas and gaiters. However, his enemies describe him as "a boring man." 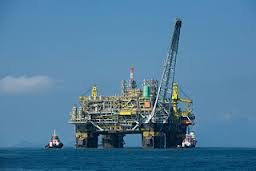 The See of Canterbury (if he gets it) will give Welby a new platform for his views.