Well-known bloggers Matthew, Mark, Luke and John were quarrelling today over which of them had first broken the news that the top Church job would go to Simon Peter, the former fish tycoon and graduate of the prestigious Galilee Fishing College. 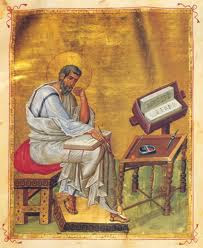 Matthew - his blog is read by millions.

"I was there first," claimed Matthew angrily. "As most people know, two names have to be submitted to Jesus, for Him to make the final decision. These names were Simon Peter and Judas Iscariot, and it was felt that Judas was not the person to bring the Church into the First Century, although he might be very influential in the Twenty-first. Mark and Luke, bloggers and journalists for the Synoptic Newspapers, got the story from my Twitter feed. And poor old John hasn't even reported the story yet - I think he can't believe he didn't get the top job himself!"

Being Archbishop of Galilee brings with it various privileges - for example, Peter is guaranteed canonization, and the keys to Heaven - but brings with it the dangers of martyrdom, especially if (as seems probable) the see is moved to Rome. 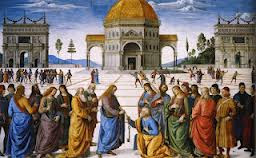 "So the big key opens the Gates of Heaven, and the small one opens the Saints' washroom?"

Mark, of the Synoptic Times, and Luke, of the Synoptic Telegraph, were angrily maintaining today that they were the ones with the scoop. "Matthew even got the facts wrong about President Herod's re-election," they sneered. "He was tipping the other candidate, Romani."

Over at the Galilee Tablet, Catherine Philistia was angrily complaining that Christ needed to move into the First Century and appoint a woman to head His Church. "I've got a friend called Tina Beelzebub who would be perfect at the job," she insisted. "We know who's really backing Christ - it's an old Man living far away with His head in the clouds!" 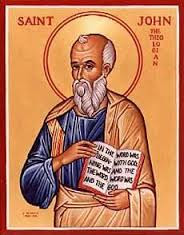 John - with a scoop of his own.