In which Eccles makes a new friend.

Atheists were left confused today when they discovered that they were not alone in disagreeing with the London School of Economics Student Union ban on "Jesus and Mo" tee-shirts, which portray Jesus and Mohammed as cartoon characters. Many Christians think the ban is a bit silly too. 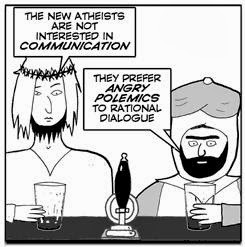 A rare moment of truth in "Jesus and Mo".

Although anyone with two brain cells would find them trite, foolish and in poor taste, it is the case that in the eyes of many atheists the Jesus and Mo cartoons are wonderful. According to the J and M web site (and this is true) Richard Dawkins says: Jesus and Mo cartoons are wonderfully funny and true. The New Humanist magazine says: Consistently amusing, frequently thought-provoking and often heart-warming.

Curiously, there are very few quotations from Christians or Muslims, although the Council of Ex-Muslims says: Blaspheming, heretical, filthy Hell fodder (well, yes, that seems to be the point) and Karl Gilberson says: ...humor is humor and this cartoonist doesn't have it (well spotted). 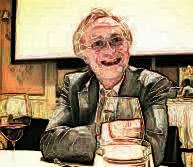 Still, you shouldn't ban tee-shirts for being silly and boring - unless they are expected to cause dangerous cases of narcolepsy in those who see them - so on this occasion, I find myself in the uncomfortable position of siding with the selfish genius himself, when he says: I'm 'offended' by backwards baseball caps, chewing gum, niqabs, 'basically' and 'awesome'. Quick, LSE Student Union, ban them all.

This is really rather embarrassing. Having on numerous occasions portrayed Dawkins on this blog as, at best a self-centered buffoon, and, at worst rather a sinister person, I now find myself in agreement with him on something. 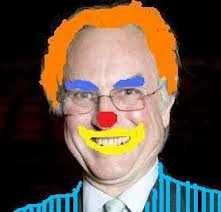 Actually, seeing an atheist come out in favour of free speech is rather refreshing. To redress the balance, let's see the French police in action against some anti-same-sex-marriage protesters. 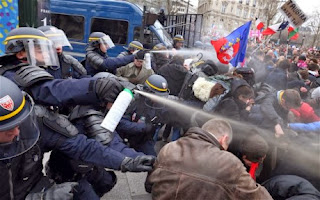 So, after being nice to dear demented Dicky Dawkins, we may finish off with a design for a Hollande from Hell tee-shirt. I hope the LSE students will let me wear it. 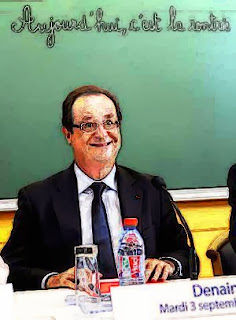