Following ITV's attempt to revive its posh soap Downton Abbey by adding a gratuitous rape scene, the BBC has decided to spice up Songs of Praise. 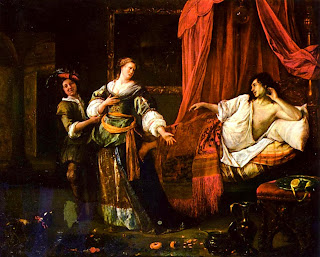 The "new look" Songs of Praise.

Said a spokesman, "We have decided to make Songs of Praise more exciting for those who are not normally of a religious disposition; to do this we shall include scenes of violence in place of the bit where the presenter waffles on about how St Tharg's started up its Gay Grandmothers Support Group in 1662. Next week we shall re-enact the rape of Tamar by her brother Amnon, thus combining incest and rape in a tasteful and spiritually nourishing context."

The spokesman went on to point out that "Songs of Praise" is already regarded as a programme suitable only for those with strong stomachs. After all, it has been known to broadcast scenes of explicit "Walk in the Light", even before the 9 p.m. watershed.

Meanwhile, in other news, the BBC has announced the discovery in Arundel and Brighton of a large stock of previously-missing videotapes from its long-running series Bishop Who? It includes several adventures which some people thought had never even been made. 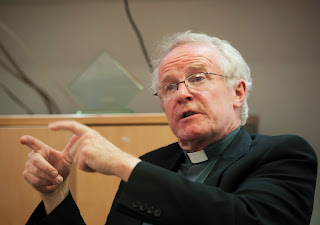 Bishop Who demonstrates Venusian ju-jitsu in The Rebels of Acta.

Many fans of Bishop Who will be glad to see The Rebels of Acta again. In this story Bishop Who confronts a bunch of renegade Catholics who have been attempting to change the course of history, and escapes from their clutches with some well-timed Venusian ju-jitsu.

There is also a sub-plot involving Bishop Who's conflict with a mysterious organization called Quest, which attempts to infiltrate the Empire of Arundel. 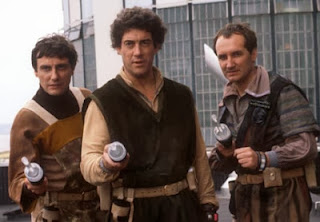 Fr Blake and his helpers greet the Argoids of Brighton.

Another recovered story is the The Argoids of Brighton, in which Bishop Who courageously defends Fr Blake from the venomous attacks of a poisonous creature. This story later led to a spin-off series, called Blake's Heaven. 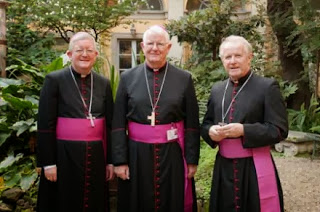 A group of time-lords, in ceremonial robes, swearing loyalty to President Francis.

In another once-lost adventure, Magisterium, Bishop Who travels to the Time-Lord Planet of Roma, in order to protect the sacred laws of Humanae Vitae from barbarian invaders wishing to change the sacred teachings on morality.

It is rumoured that further lost stories remain to be discovered, including one, The Bishop's Letter, in which Bishop Who decides that people will take him more seriously if he writes a blog. This plot device is, of course, well-known from Star Trek. 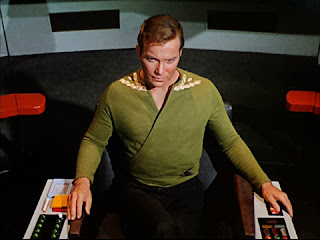