Bishop accused of a luxury lifestyle

The main news item on the BBC, and elsewhere, today has been the case of the German Catholic bishop, Franz-Peter Tebartz-van Elst, who has apparently been suspended for living a luxurious lifestyle, considered inappropriate by the new St Francis-inspired Church. 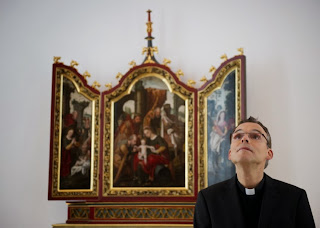 The bishop: note the expensive painting, when a photo of his cat would have been more suitable.

In vain did the bishop offer to accept a cheaper lifestyle, by selling off the more lavish parts of his name (a Peter Tebartz van, low mileage) and calling himself simply Franz Elst. 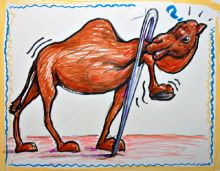 The Pope's favourite painting in the Vatican museum.

Other bishops may also expect trouble. For example, Vincent Nichols, the Archbishop of Westminster, lives in expensive accommodation in central London, and he has been advised that it would be better if he lived in a bedsit in Tower Hamlets and walked in to work every day. Excuses that "it's handy for my Cathedral" are just unacceptable in this day and age. 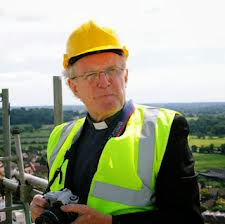 Meanwhile, the Anglicans were similarly embarrassed, after it was revealed that their supreme governor, Mrs Elizabeth Mountbatten-Windsor, 87, was living in a luxury palace in London. However, it turns out that apart from her religious duties, she has a part-time job ruling the UK - and various other countries - and so the "Anglican in the pew" does not pay directly for her lavish lifestyle.

Pope Francis himself is interested in demonstrating his fidelity to the spirit of his mentor, St Francis the First, by cutting out all luxury and living on crusts of bread and any kitty-kill that the Vatican cats bring in. So far his experienced adviser, Cormac Murphy-O'Connor, has dissuaded him from doing this, not least because he himself doesn't fancy joining the Pope in a diet of vole sandwiches. 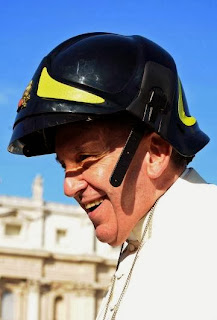 Pope Francis exchanges his costly zucchetto for a simple helmet.