Theologians and scientists were equally excited today, as the Nobel Committee announced that the 2013 prize for Physics would be awarded to God. 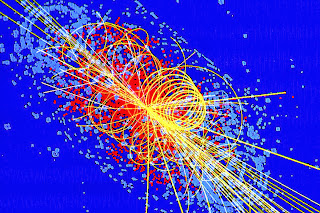 The tracks of the God Particle (a.k.a. the Higgs Boson).

Press reports at first claimed that the prize was to be award to Professor Peter Higgs, the physicist who first conjectured that there was a missing particle, and, surprisingly, that like him it was called "Higgs". But when it was pointed out that this was the particle without which Mass was impossible, it became clear that in fact God Himself was involved.

Religious leaders were quick to point out that the very idea of a large hadron collider, which involves bodies going round in circles, crashing into other bodies and emitting energy, is based on various well-known church concepts, for example, a synod, or a conclave of cardinals. 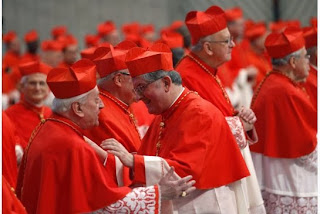 God has decided to make a statement concerning His Nobel prize, and has broken tradition by refusing to talk directly to a prophet who might take down His words verbatim and make a book out of them. Instead, He has given an interview to an Italian journalist. Unfortunately, the journalist was somewhat deaf and didn't catch everything the "still small voice of calm" was saying. Moreover, his pencil broke (he had not come to grips with modern technology), and so he had to reconstruct the interview from memory.

Apart from that, the interview was a great success, although it is not clear whether God really said: "All this Good and Evil stuff is over-rated, the important thing is to have fun," words which have shocked traditionalists.

In other news, American Biblical scholar Joseph Atwill has claimed that the comedy atheist, Richard Dawkins, never existed, and his entire story was fabricated by Christians wishing to discredit atheism.

Said Atwill: "We have obtained confessions from a group of Christians, which make it clear that the patently absurd life story of Dawkins was just a propaganda exercise on their behalf. The entity known as 'Dawkins' has been constructed by combining obviously meaningless comments on religion with computer images. It's just surprising that it actually fooled anyone for more than a few moments, but people will always believe what they want to believe." 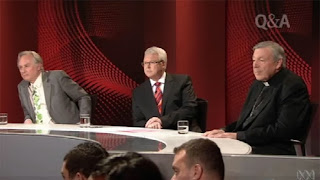 A "debate" with Cardinal Pell - the wonky Dawkins image is a clear sign of a forgery.

The purpose of the Dawkins Hoax is obvious - as a result, Christian belief is stronger than ever before, and even Islam is experiencing a revival as a result of the straw-man criticisms made by "Dawkins". It has led sceptical people to wonder whether there are other fabricated "celebrities" operating - surely preposterous creations such as Stephen Fry cannot be real?