Somebody claiming to be Cardinal Vincent Nichols has joined Twitter as @cardinalnichols. Since the Westminster Diocese account seems to endorse him, we have to believe that this is the real Vin posting, and not a rude and naughty sockpuppet.

The good cardinal's first tweet already contains two gaffes, for he refers to the Corpus Christi procession starting on Sunday from Farm Street Church. So, he'll be setting off three days after the pope, and he's chosen a church associated with the infamous "gay masses". Oh dear, perhaps someone is trying to make him look silly, after all. 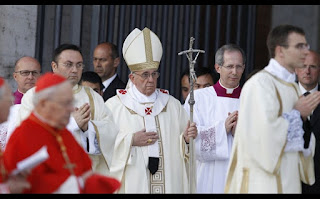 As the Synod of the Family (Part 2) gears up for action, all the sides involved are trying to keep a high profile, rather as if the Holy Spirit were going to be swayed by whoever shouted the loudest. It cannot be long before the great Cardinal Kasper ("the pope's jester") makes an appearance on Twitter, perhaps with a "deranged tweet of the day" to entertain his followers. The pope said this... the pope didn't say this... I know the pope thinks this... I never said that the pope thought that...

Of course some senior clergy have no trouble with computers. 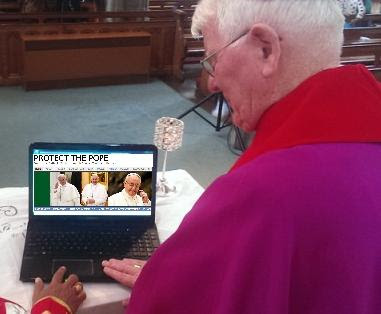 The Bishop of Lancaster reads his favourite blog (apart from this one).

Anyway, your Eminence, I know you're a great fan of this blog, so do take a bit of advice. Try and say something spiritually nourishing, not just the usual celebrity Twitter-stuff such as: @cardinalnichols Having a glass of wine with my fish today. Only Vin ordinary lol. 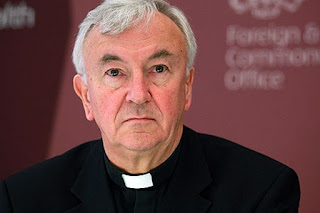 Here's a suggestion, Cardinal. You could, for example, quote bits of the Bible at us (it's the large black book on your shelves, covered in dust), or simply tell us what a great idea marriage is, when considered as a contract for life between a man and a woman. Still, if you want, I can lend you a joke or two about the pope's recent and very humble appearance with tatty sleeves - something about his making too many off-the-cuff remarks? Ha ha ha. Well, my aunt liked it. 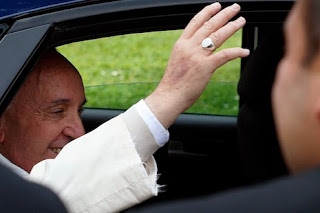 P.S. I've been wearing shirts with frayed cuffs for years, but until now I didn't know I was a leader of fashion. Next, the pope will be copying my holey socks.