The Spirit of Magna Carta

As readers will be aware, today is the anniversary of the signing of Magna Carta - a little-known Vatican II document - by "King" John XXIII, who had been forced to make concessions to the powerful barons of the Church (known in those days as bishops). Since Magna Carta has long been regarded as the main origin of the rights enjoyed by modern Catholics, it may be helpful to explain exactly what these are. 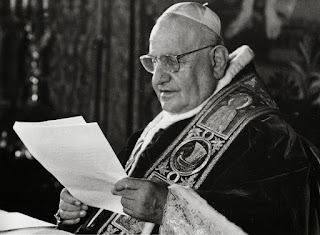 1. That the following sins were no longer to be considered as serious, or to be punished by eternal damnation: murder, theft, adultery, false witness, coveting neighbours' oxen.

2. That no Catholic could be forced to sing "Shine, Jesus, shine," "Lord of the Dance," "If I were a butterfly," or anything by Paul Inwood.

3. That no Catholic could be forced to attend clown masses, puppet masses, gay masses, or masses with liturgical dancing. 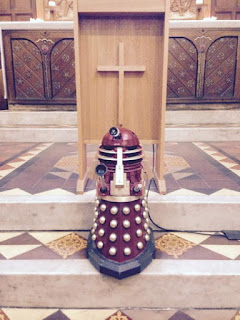 The same applies to Dalek masses.

4. That retiring collections should be optional (the official position of "burly chap who stares menacingly at you until you have coughed up money for CAFOD to squander" being abolished).

5. That masses need no longer be in Latin, but the common people were allowed to worship using vernacular expressions such as "Eee, by gum", "Yaki da, boyo" and "Cor, strike a light, guv!"

6. That the "Kiss of Peace" was strictly optional, and anyone seen prodding his neighbour in order to intimidate her into a kiss would be considered guilty of assault. 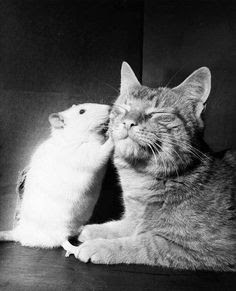 Eeek, my lunch just kissed me!

7. That the barons would be allowed to celebrate Ascension Day, Corpus Christi, etc. on any day that suited them, rather than using the same ecclesiastical calendar as the King.

Such hard-won rights continue to this day, so we are indeed lucky to have Magna Carta.