This week's instalment of the Eccles Bible project is short and sweet. The book of Ruth, just 4 chapters long. No smiting, but telling the story of one of the ancestors of King David. Spiritual nourishment in a user-friendly form! 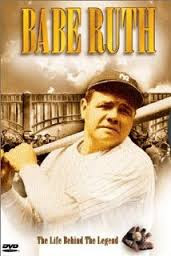 No, Richard. This is not the Ruth we had in mind.

We start off in the time of the judges, with Naomi, who has managed to lose her husband and two sons (to lose two looks like carelessness...). She still has two daughters-in-law: one of these is our heroine, Ruth. She decides to stay with Naomi, who, all things considered is not the merry widow you might expect. "Call me Mara," she says, "because the Almighty has made my life very bitter."

In fact we continue to call her Naomi, and Ruth stays with her. Rather than hang around the house with a moaning mother-in-law she goes into the fields and starts picking up bits of corn. There she encounters Boaz, who takes a fancy to her. 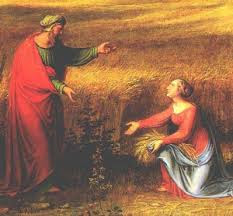 Boaz falls in love with his gleaning-lady.

Her technique for catching her man is unusual, as she goes over to where he is sleeping, uncovers his feet, and lies down near them. Things move quickly, he gives her a token of his affection (six measures of barley) and soon they are married. 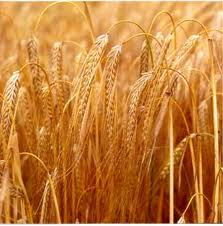 Have you considered barley as a gift for St Valentine's Day?

Well, that's about it, except that they have a son called O'bed (it seems that one of them had Irish ancestry), who in turn begets Jesse, father of David. Who is going to be a big cheese...

Naomi seems to be very pleased, and drops the alias "Mara", as she has a grandson, and is thereby comforted. Well, it's a touching love story, with a rather simple plot and a happy ending. Actually, there isn't much mention of God in it, although it does show virtue being rewarded. 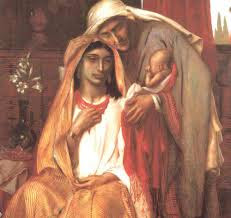 Ruth, it can't be good for that child to feed him on nothing but barley.