Vincent Nichols to be new Dr Who

We can reveal exclusively that the BBC has offered the role of the 12th Doctor Who to Vincent Nichols, 67, Archbishop of Westminster and part-time spiritual leader. 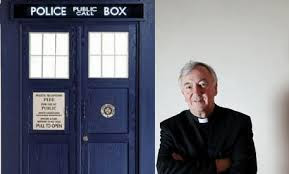 The new Doctor poses outside his Tardis.

It is thought that Pope Francis had a hand in Archbishop Nichols's appointment, which can be seen as a consolation prize for his failure to obtain a role in the long-running soap opera The Cardinals.

Some people had suggested that the Dr Who role might go to a woman - actresses such as Tina Beattie and Catherine Pepinster were suggested - but, in the end, the BBC producers decided to remain with tradition, feeling that they did not have the authority to ordain a woman as Dr Who; our Lord Sidney Newman had explicitly called a grumpy old man to be the first Doctor, and the appointment of Nichols is seen as a return to that tradition.

One of the first adventures will involve lesbian lizards in Farm Street, London.

Armed with his new-style sonic screwdriver, modelled on the pectoral cross, the new Doctor will of course be facing his traditional enemies, such as Daleks and Cybermen. However, it may be that some of his adventures will have a more religious emphasis: in particular, we may see the return of the Meddling Monk, who was active in the 1960s. The Meddling Monk - an old adversary who tried to block Vatican II reforms.

Another foe sure to re-appear before long is the Weeping Angels. In his current role, Vincent Nichols is of course well used to weeping angels - after all, the cries of woe in Heaven whenever a new issue of the Tablet is produced can be heard even in Westminster. 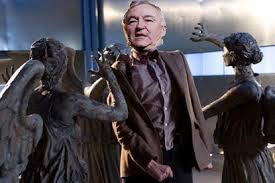 Today the new Doctor was delighted with his new role, especially because of the new opportunities it gives for having his photograph taken. 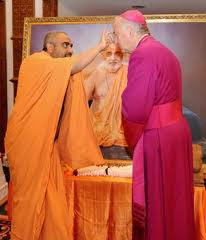 The new Doctor engages in mind-warfare with a sinister yogi.