The diary of a nobody

June 4th. Represented Ballydancer in a hurling match. The aim was to hurl as many insults at the Vatican as possible in 90 minutes. I managed to keep ranting for the whole period without taking a breath. "Well done, Father Flummery!" said the spectators. 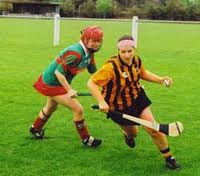 Ladies' hurling. Of course the Vatican wants to stop it.

June 5th: Still in a state of open warfare with the Vatican. Went to the Ballydancer post office to collect my mail - they won't deliver it to the house since I poured a plate of Irish stew over the postman, mistaking him for my bishop.

My letter of complaint to Pope Benedict has been returned, marked "Gone away!" Apparently there's a new pope, called Francis. They kept that one a secret didn't they? I expect they did that to confuse me and my secret society CRAP - The Catholic Revolutionary Association of Priests. 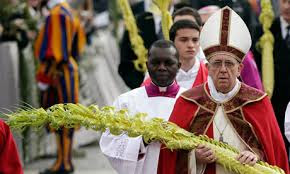 The new Pope (in front, with giant fish). But nobody told Tony Flummery, did they?

June 6th: Read the Tablet. Very good, as is the National Catholic Reporter. They're taking up my case against the Vatican. "Justice for Flummery!" suggested that nice woman, Catherine Peppermint. They also suggest writing to Basil Loftus, who can always be relied on to say something to irritate Catholics.

June 7th: I am a great admirer of Enda Life, our Taoiseach, so I went into the street with a banner "Enda Life for Jesus." Enda's a fine Gael, the finest you ever saw. My brother Frankenstein works for him, you know. At the moment we are all campaigning for lots of lovely abortion in Ireland - if that doesn't annoy Pope Benedict Francis, I don't know what else will! 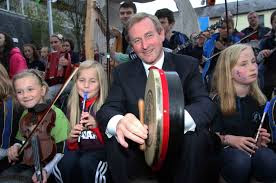 Enda Kenny plays "When Irish eyes are smiling" on a giant tin of shoe-polish.

June 8th: Spent the day working on my latest book, Judas Iscariot - the first rebel against the Vatican. The man was an inspiration to us all.

June 9th (Sunday): Said Mass at Ballydancer. It seems that there is a new translation of the Missal. It's terrible. I got as far as "consubstantial with the Father" and then fell to the ground in a fit, foaming at the mouth. It seems that I'll be spending next week in the Ballydancer Infirmary. I'll bet that the Vatican doesn't send anyone round with grapes. 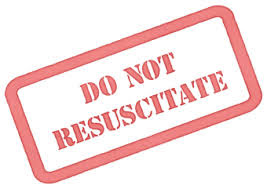 Someone fixed this to my hospital bed! I suspect the CDF.