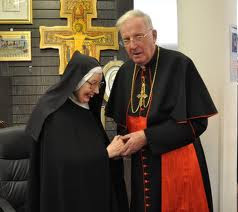 "Now this statue of a Cardinal is very lifelike indeed."

Nasty Young: So, Sister Wendy, the Pope has suggested that you take your life as a hermit to its next stage, and move to a desert island?

Sr Wendy: Yes, until recently I was living the contemplative life, sometimes not speaking to anyone for as long as ten minutes at a time. My only contact with the outside world was my regular television broadcast. But the Holy Father thinks I could take this further. 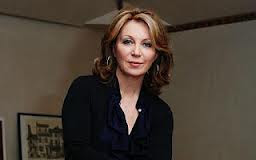 Now, as a BBC employee, I feel it is my duty to insult the Catholic church.

Don't you think that all the evils of the world would go away if the Catholic church would only change its views on contraception, abortion, and women priests? Why can't it adopt the values of the BBC, as laid down by Sir Jimmy Savile? I mean, look at the real problems of the world - HIV, famine, genocide, cancer, Norovirus, wet weather, the price of designer clothes, the train service - why isn't the Vatican taking responsibility for all of these?

Well, Kirsty, I am sure that the Pope is listening to this programme - I know he's a great fan of mine - and we are all praying that he will lead the Catholic church into a position where it will not cause any offence to secularists. 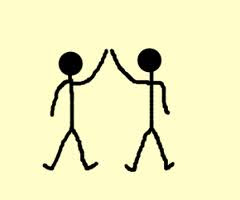 This charming work of Renaissance art reminds us that God wanted men to marry each other.

Now, your first disc is that famous rugby song, "Four and twenty virgins came down from Inverness," sung by the choir of Christ Church, Oxford. Did you choose it because it reminds you of your university days?

Oh, definitely. Did I mention that I went to Oxford, and my examiner, Professor Tolkien said I was the cleverest person he'd ever seen? Then I told him I wanted to be a nun, and he made a joke about habits and hobbits. When I finally took my vows, I planned to take the name of Sister Brainy, but the Mother Superior advised me against it, so I became known as Sister Humility instead... 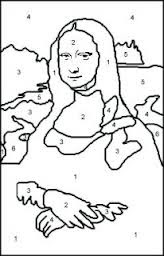 My luxury item - an unfinished masterpiece by Leonardo da Vinci.

If you hated this piece, then you will certainly not wish to read this:

The best in Catholic journalism.