An audience with Paul Inwood

Having read the startling comment from Paul Inwood, the Prostecnic Vogon Jeltz of Catholic worship, claiming that Pope Benedict - a mere novice in these matters - had made an incorrect statement about liturgy, I hurried down to Portsmouth for an audience with the great man. 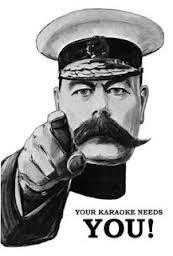 The palace of Pope Paul VII is truly magnificent, as one would expect from a man of his distinction and importance (he told me). I entered and knelt before "the man who put the 'litter' in 'liturgy.'" Paul was sitting on a golden throne, and he graciously allowed me to kiss his ring. In one corner of the room, there stood a choir of mystic monks, intoning a solemn and dignified Gregorian chant. This surprised me, as I had been expecting a choir to be singing "Alleluia Ch-Ch" in one-part harmony, but it was later explained to me by an aide that "round here, Inwoodian chant is business, Gregorian is pleasure." 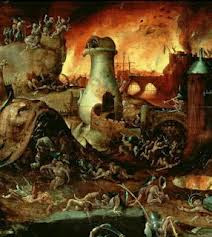 Hell - one place where you are sure to hear Paul Inwood's music.

So I asked the man they call the Head of the Caterwaul Church about his relations with his great rival in Rome. "Benedict is fundamentally a good man," he said, "although of course he is not an educated man like what I is, and he does not have access to an army of advisers as I do. No wonder he made the blunder of denying that Pope Paul VI had abrogated the EF Mass. Benedict evidently hadn't read the Encyclical De Musica Vulgarissima in which it was specifically asked that all content be removed from the liturgy, and that henceforth we should sing jolly songs involving finger-snaps and animal noises." 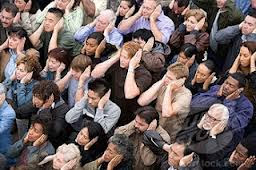 A modern congregation appreciates the music of Paul Inwood.

Knowing that Paul Inwood's pronouncements are generally believed to be infallible, I decided that here was a case of Pompeius locutus est, causa finita est.

"So how are you getting on with the new Bishop of Portsmouth, Philip Egan?" I asked. "I hear that he's something of a traditionalist."

"We get on very well," said his Howler-ness. "He is very concerned that I may be tired through overwork. The Bishop sends me all sorts of interesting literature about retirement schemes, and he suggests that a holiday home in Beirut would suit me down to the ground. It's good to be appreciated."

Before I left the holy presence, I persuaded Pope Paul VII to give me his blessing. "Bless you, bless you, bless you, Ch-Ch-Ch! Snap-Snap! Here a Moo, there a Moo, everywhere a Moo-Moo," he sang, making me feel at one with the beasts of the field with these simple but well-chosen words. Yes, I had been in the presence of a great man, or at least, "a man who grates." 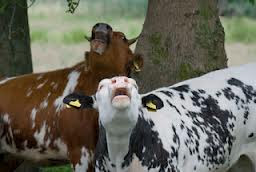 Where ever you go, the music of Paul Inwood is to be heard